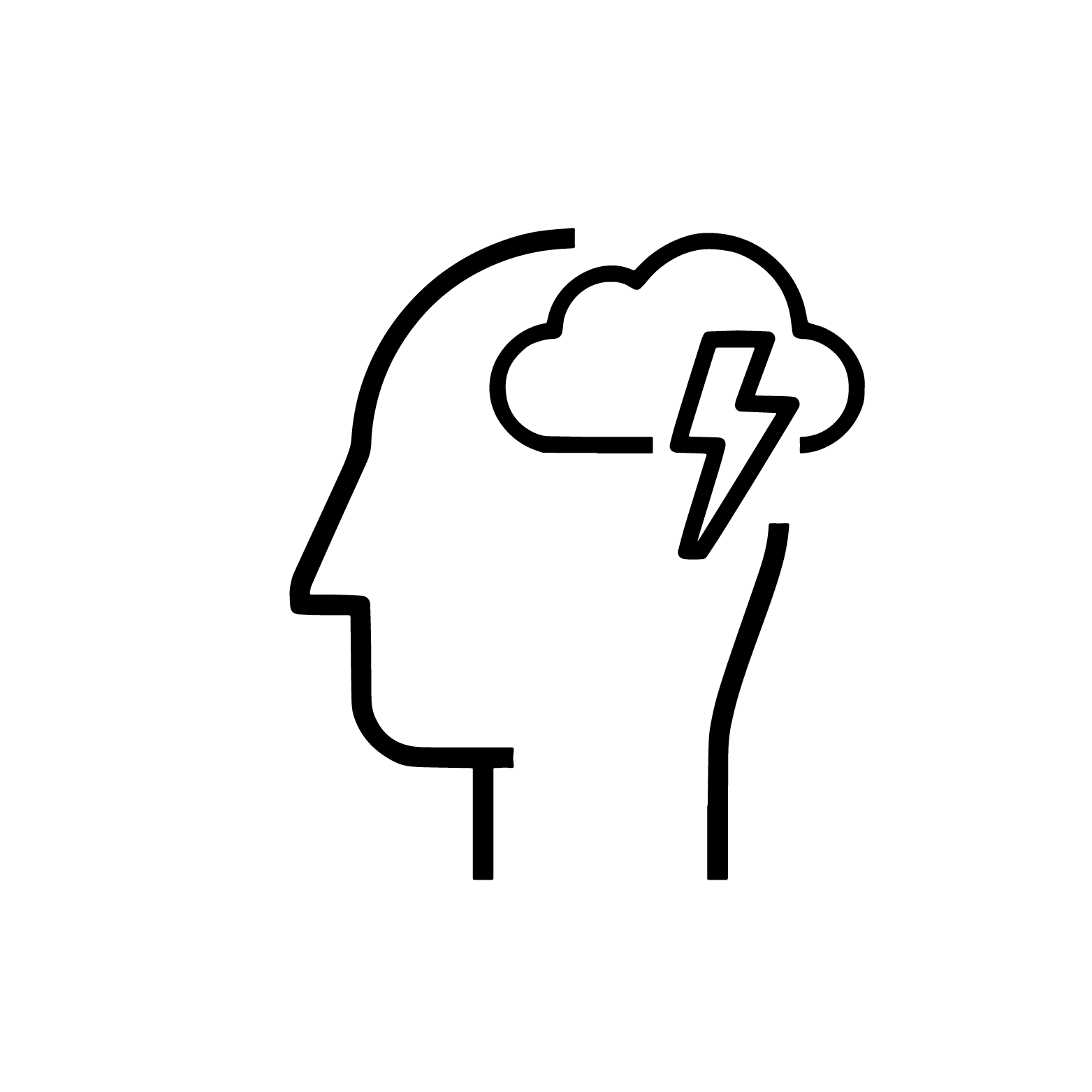 Trauma is the response to a deeply or severely distressing or disturbing event(s) that overwhelms a person’s ability to cope, brings about feelings of helplessness, diminishes a sense of self and the ability to feel the fullest range of emotions and experiences.

For as long as a trauma is not worked through, triggering occurs with the body and mind re-experiencing and reliving the old trauma again and again.

‍Posttraumatic stress disorder (PTSD) is a severe, often chronic and disabling disorder, which develops in some persons following exposure to a traumatic event involving actual or threatened injury to themselves or others. PTSD is characterized by intrusive thoughts, nightmares and flashbacks of past traumatic events, negative mood and cognitions, avoidance of reminders of trauma, hypervigilance, and sleep disturbance, all of which lead to considerable social, occupational, and interpersonal dysfunction.

Effective treatments for PTSD include medications and psychotherapies. However, a substantial proportion of patients have symptoms resistant to treatment. It is often necessary to switch or combine treatments to achieve a satisfactory therapeutic response.

‍Cognitive and behavioral therapies used to treat PTSD include exposure therapy, cognitive therapy and various combinations of these modalities, often with other components. These modalities are sometimes described collectively as trauma-focused cognitive-behavioral therapy (CBT) if they specifically focus on the traumatic material. Cognitive approaches help patients to correct erroneous cognitions, while behavioral approaches aim to decrease symptoms through exposure to reminders of the traumatic event.

Assessment is an important component of CBT in PTSD, initially to confirm the primary and co-occurring diagnoses and to establish baseline ratings of symptom and functional severity. Subsequent severity ratings with the same instrument provide information on the extent to which the patient is responding to treatment and if adjustments need to be made. Clinical evaluation and assessment instruments for PTSD are reviewed further separately. (See "Posttraumatic stress disorder in adults: Epidemiology, pathophysiology, clinical manifestations, course, assessment, and diagnosis", section on 'Assessment'.)

Assessment results should be shared with patients in a therapeutic manner, for example, in teaching patients about PTSD and to notice changes with treatment. Results can inform discussion of how and why changes were (or were not) achieved, and how new habits and therapeutic gains can be maintained. The results can illuminate important subjects in therapy. As an example, discussion with a patient who has a response bias toward minimizing improvement can be informed by serial assessment results that indicate marked improvement.

Theory — Prospective studies indicate that PTSD symptoms are almost universal in the immediate aftermath of trauma. The majority of individuals have symptoms of re-experiencing, avoidance, and hyperarousal following a severely traumatic event. For most individuals, these symptoms steadily resolve over time, while those who meet diagnostic criteria for PTSD continue to experience the symptoms. PTSD can thus be viewed as a failure of recovery caused in part by a failure of fear extinction following trauma.

Individuals with PTSD are hypothesized to develop cognitive and behavioral avoidance strategies in an attempt to avoid distressing emotional reactions. The presence of these extensive avoidance responses can interfere with the extinction of fear by limiting the amount of exposure to realistically safe reminders of the traumatic event.

Emotional processing theory holds that PTSD emerges due to the development of a fear network in memory that elicits escape and avoidance behavior. This theory proposes that effective therapy involves correcting the pathologic elements of the fear memory and that this corrective process is the essence of emotional processing.

‍Cognitive therapy — The application of cognitive therapy to PTSD is based on the theory that the meanings that we impose on events contribute to emotional states, and therefore changing how we think about them can reduce PTSD symptoms and improve wellbeing.

In the cognitive therapies, patients are assisted in thinking about the traumatic event and themselves more realistically. Socratic questioning is used to elicit information and challenge the patient’s maladaptive beliefs.

An example can illustrate the use of cognitive therapy for PTSD. A woman raped by a home intruder wrongly blamed herself. The therapist led the woman through a series of questions about the event, establishing through her answers that her actions were reasonable, that she had not done anything to bring on the event, and that she could not have prevented it. She was then asked, if her sister or her daughter behaved in the same way under the same circumstances, would she think they were to blame? Allowing the woman to generate the information in this discussion and then to re-evaluate her perceptions was successful in changing her self-blaming beliefs.

‍Exposure-based therapies — Exposure therapy assists patients in confronting their feared memories and situations in a therapeutic manner. Re-experiencing the trauma through exposure allows it to be emotionally processed so that it can become less painful . By repeatedly confronting traumatic memories or safe reminders of a traumatic experience, the individual can experience them safely, until they no longer elicit such strong emotions and can see that they are not dangerous.

Exposure therapy programs for PTSD differ in how the feared events are experienced during treatment:

●In vivo exposure – In in vivo exposure, the patient confronts a real-life, safe situation that reminds s/he of the event – as an example, by returning to the scene of an earlier motor vehicle accident.

Many patients with PTSD mistakenly view remembering or processing the trauma as dangerous, probably because it is distressing; therefore, they devote much effort to avoiding thinking about it. Re-experiencing the trauma through exposure serves to disconfirm this mistaken belief and allows them to experience decreasing levels of distress while still remembering what happened.

Following an imaginal or virtual reality exposure portion of a session, it is important for the therapist and the patient to discuss material that emerged during the exposure. The discussion, or processing, often centers on the patient’s emotional response to the exposure, for example, making explicit that by going through the memory three times, his distress decreased and he was able to remember more. This is also the time for the therapist to use Socratic questioning to challenge maladaptive thoughts the patient may hold, including beliefs related to guilt, blame, and responsibility.

Exposure therapies differ in the number and types of included components, including the number and frequency of exposure sessions. Exposure therapy programs often include homework exercises making use of imaginal exposure. In one common approach, a tape recording is made during a session of the patient describing the traumatic event aloud. Between sessions, the patient practices exposure at home, listening to the tape and further processing the traumatic material.

Prolonged exposure is a specific exposure therapy program developed for PTSD, and used by the United States Veterans Administration to treat military veterans with PTSD. It consists of breathing retraining, education about common reactions to trauma, imaginal exposure to the trauma memory, processing of the traumatic material, and in vivo exposure to trauma reminders.

‍Efficacy — Exposure therapy is an effective treatment for PTSD. A systematic review identified 23 randomized trials of exposure therapy for PTSD. The trials studied exposure either individually or combined with other interventions, typically in comparison with waiting list status or receiving usual care. Seven of them were judged to be without major methodological limitations. All seven found that exposure therapy reduced PTSD symptoms. Overall, the degree of improvement was clinically significant. Evidence of efficacy has been demonstrated in populations experiencing multiple types of trauma.

Cognitive-behavioral therapy — CBT for PTSD includes both cognitive and behavioral components. It can also include additional approaches, such as education and coping skills training. Specific programs of trauma-focused CBT vary in their composition. Trials have mostly tested individual CBT in PTSD, but a cognitive-behavioral couples therapy has been tested.

As an example, cognitive processing therapy, a widely used therapy for PTSD, is principally a cognitive therapy, though it includes exposure to memories of the trauma. The exposure component consists of writing a detailed account of the trauma and reading it in the presence of the therapist and at home.

Cognitive processing therapy examines thoughts and feelings that emerge during the exposure exercise and provides training to challenge problematic beliefs about safety, trust, power, control, esteem and intimacy. Individuals are taught to challenge faulty assumptions and self-statements and to modify maladaptive thoughts and over-generalized beliefs. Cognitive processing therapy is used by the United States Veterans Administration to treat military veterans with PTSD.

Efficacy — In a meta-analysis of 14 randomized trials involving 658 patients with PTSD, trauma-focused CBT led to greater reduction in PTSD symptoms than usual care . Despite the variability among CBT programs, studies comparing components individually or in different combinations have not found them to be consistently associated with differential outcomes.

As an example, 171 women with PTSD resulting from sexual assault were randomly assigned to either cognitive processing therapy, prolonged exposure, or a waiting-control group Treatment consisted of 12 sessions conducted twice weekly for 60 to 90 minutes. The therapies were equally effective in reducing PTSD symptoms, and both were substantially more effective than the control intervention.

Couples CBT — Cognitive-behavioral conjoint therapy is a manual based intervention with components of CBT and couples therapy for individuals with PTSD and their partners. In a clinical trial, 40 couples (both heterosexual and same-sex) were randomly assigned to receive the 15-session couples therapy or to a wait list control. At the end of the trial, participants receiving the couples therapy experienced a greater reduction in PTSD symptom severity and more improvement in intimate relationship satisfaction, compared with the control group. Treatment effects were maintained at three-month follow-up.

Coping skills training — A variety of behavioral techniques are used for PTSD by therapists of all types. In contrast to the therapies above, these interventions do not focus on the patient's trauma. Usually one of several components of a therapy, evidence is lacking to suggest that these techniques are helpful to treat PTSD by themselves.

‍EYE MOVEMENT DESENSITIZATION AND REPROCESSING: Eye movement desensitization and reprocessing (EMDR) is a form of psychotherapy that some liken to CBT but also incorporates saccadic eye movements during exposure.

The technique involves the patient imagining a scene from the trauma, focusing on the accompanying cognition and arousal, while the therapist can use a Tachometer or move two fingers across the client's visual field and instructs the patient to track the fingers. The sequence is repeated until anxiety decreases, at which point the patient is instructed to generate a more adaptive thought. An example of a thought initially associated with the traumatic image might include, “I’m going to die,” while the more adaptive thought might end up as, “I made it through. It’s in the past.”

Efficacy — Most, but not all, systematic reviews and meta-analyses have concluded that EMDR is an efficacious treatment for PTSD. A meta-analysis of five randomized trials with a total of 162 patients found EMDR reduced PTSD symptoms more than usual care or waiting list status (standardized mean difference = -1.51, 95% CI -1.87 to -1.15). Several major practice guidelines, but not all, have similarly concluded that EMDR is efficacious for PTSD. Some researchers have suggested that exposure is the effective component of EMDR, and eye movements may not be necessary, but this hypothesis requires further study.

‍MINDFULNESS-BASED STRESS REDUCTION  — Mindfulness-based stress reduction, which teaches patients to attend to the present moment in a nonjudgmental, accepting manner, led to modest reduction of PTSD symptoms in a clinical trial [34]. The clinical trial randomly assigned 116 veterans with PTSD to receive nine sessions of either mindfulness-based stress reduction or present-centered group therapy, an active control. After nine weeks of treatment and two months of follow-up, patients assigned to receive the mindfulness intervention showed a greater decrease in self-reported PTSD symptoms and were more likely to show clinically significant improvement in PTSD symptoms compared with control group participants (48.9 versus 28.1 percent). However, the two groups did not differ significantly in the proportion of patients who continued to meet diagnostic criteria for PTSD. Mindfulness-based psychotherapies have shown evidence of efficacy in the treatment of depressive and anxiety disorders.

BACK TO VIEW OTHER CHALLENGES